Open roles spiked in December but overall 2019 was an average year!

Open roles spiked in December but overall 2019 was an average year!

While local businesses struggled to find staff toward the end of 2019 a result of many companies waiting until right on the holiday period before looking for staff, the last six months of 2019 was actually an average year. The last six months increased 5% on 2018 and 2% on 2017.  The jobs market remained extremely tight especially in December, however the peak period for the year seems to have been reached in October and is now slowly easing off.

Many businesses waited until December to look for holiday staff rather than going out early in November.
This was partly weather related as local owners dealt with the potential flooding and an unseasonably cool start to summer, which led to softer business confidence. The first 3 weeks of December saw record open positions being advertised with an average of 265 roles being advertised according to the latest JobFix data before dropping back to 180 in the week leading into Christmas. 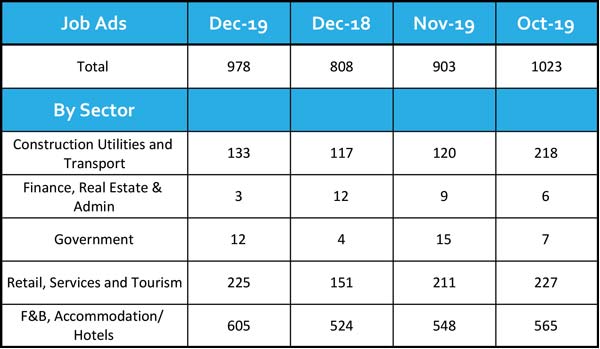