Escape Quest is looking for an all-star to join our close-knit team on a full time hours basis (approx. 60hrs per fortnight). With comprehensive training provided. The ideal candidate will be based in Queenstown for at least the next 6-12 months.

Over the past 6 years Escape Quest has provided a fun and safe environment for our staff, with stable employment in a stimulating, enjoyable setting.  Escape Quest is not effected by weather conditions so your rostered shifts are not weather dependent.

The successful candidate will possess the following attributes: Thrive in a dynamic environment that requires multi-tasking, are diligent, great with people, self-motivated and self-confident with excellent written and verbal English.  We will also be offering a new VR Escape Game experience so computer and VR skills would be advantageous.

Does this sound like you?  Then you should apply today! 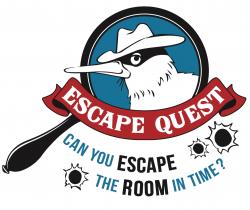 Escape Quest was founded in 2014 by Husband and wife team, Gareth and Anne-Marie Ireland.

Bringing together their respective Technology and Management Consulting backgrounds with a shared passion for Queenstown and its pioneering, gold rush era, Gareth and Anne-Marie created immersive Escape Rooms steeped in Queenstown’s 1860s history, integrated technology and with a focus on logical, clever problem solving.

Escape Quest launched in the historic Mountaineer Building in Queenstown’s CBD with 5 escape rooms and 4 unique games. Escape Quest is unique to Queenstown, creates its own games and is locally owned.